Change is hard. Desire may be the first step to creating lasting change, but it’s not enough. What do you need to add?

When I finally “got serious” about quitting smoking, I told my wife, “I’m done.” To punctuate my commitment, I threw the remainder of my pack into the wood stove, and I went to bed a non-smoker.

I remained a non-smoker until I drove past the first gas station the next morning, at which time I bought a new pack. I smoked 13 cigarettes before guilt set in, renewed my commitment to quit again, and, on the way home from work that cold winter night, rolled down my car window and tossed out the rest of the pack. I admitted to my wife that I had screwed up, and assured her that I would start again the next day with a clean, albeit wheezy, slate.

The next morning, I woke slowly. Finally, I headed into town, determined that this would be the first of many more days of remaining smoke-free.

And while that thought still lingered in my head, I spied something colorful just off the side of the road a few miles from my house. A flash of red bounced back the morning light, and I slowed my car until I got next to it. Opening the door, I saw yesterday’s pack of Marlboro lying on the road.

God works in mysterious ways, I told myself. 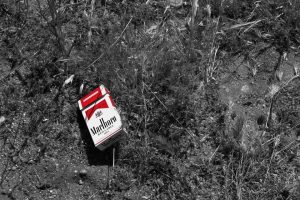 I gathered up the remaining pack and held it expectantly. If only I had a lighter, I cursed to myself. Then on a whim, I reached into the chest pocket of my flannel shirt. Old habits die-hard, I realized. My fingers closed around the fire-starter inside the pocket.

Playing at Being Serious, Take #IV-CCXLVII

This little game continued for months. Each day, I would smoke; each night I would toss out the rest of my pack on my drive home.

It got to the point where I would drive precisely 35 mph past the road marker for Rabbit Bay and then drop the cigarette pack out my window each night. That way, the pack of smokes would always end up within a 10 ft patch of road so I wouldn’t have to waste time looking for it the next morning!

Had anyone been privy to a Scott-cam, they would have seen I invested a lot more energy, money, and time to make sure I kept smoking instead of quitting smoking.

In reality, people can and do change their habits every day. Some changes we choose, like quitting smoking, losing weight, moving to a new home, starting a family, or picking a different vocation. Other changes are thrust upon us, like getting fired, having to learn a new computer system, aging, or losing someone close to us. 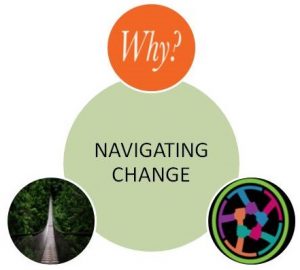 Here are some tips to practice when you face a change and are REALLY serious about sticking with it:

Regardless if you are quitting smoking or having to start a new job, know your WHYs. Why are you becoming a non-smoker? To have more energy, to promote better health, to see your kids and grand-kids grow up, to save money, to reduce the risks of cancer and heart disease, to take control of your life. Why are your starting a new job? To continue learning, to find an exciting opportunity, to contribute, to pay your bills, to meet new people, to get a new start.

If you’re REALLY serious about making a change, alter your mindset from the cons to the pros, from anger to excitement, from resentment to anticipation.

2. Find someone who has been there/done that.

It doesn’t matter if you’re trying to begin an exercise routine or learn a new computer system, it’s harder to do it alone.

In 1935, a failing Wall Street worker named Bill had grown tired of the career setbacks he experienced because of his drinking. He realized that the reason he never got his law degree was due to alcohol: he failed to pick up his diploma because he was too drunk to attend graduation. His marriage suffered, and he was institutionalized because of his alcoholism.

Desperate to stay sober, he wanted to talk to someone who might understand what he felt. He called several ministers out of the phone book asking if they knew any alcoholics. Those calls lead him to a man named Dr. Smith, a man who barely completed medical school because of his own drinking. While he opened a clinic and married, he still felt his his life was held together by a thread.

Dr. Smith committed to give Bill 15 minutes of his time. They spoke for 6 hours. That night in 1935, Wilson and Smith started what is known today as Alcoholics Anonymous, a community of members brought together by one common goal: to stay sober.

If you’re serious about making a change, find someone who gets it. Enter into a community of support with people who want the same thing you do.

Burn some bridges; build some new ones.

Do you know what they call a former smoker who collects ashtrays and lighters? A smoker. Sometimes it’s not enough to change one habit or routine; we have to change several. For example, when I quit smoking, I gave up coffee for a couple of years. The association between coffee and smoking was strong for me. Whenever I’d have a sip of coffee, I started to shake for a smoke. To break the association, I had to remove the trigger that took me back to the “old days” and the “old way of doing things.”

If you’re serious about making a change, you’ll find ways to make it harder to regress while simultaneously creating paths to make it easier to move in a new direction.

What change are you facing today? And what are you going to do about it?