My family manipulates me all of the time, and I’m okay with that. Here’s what happened recently—

A couple of months ago, my wife and I were talking about cooking, and I casually threw out that I was a better cook. She’s already better at everything else than I am, so I figured maybe I could claim a highly subjective victory around something I don’t really care about. However, the two girls overheard this and chimed in. It turns out, of all of the people who regularly cook for the girls, my cooking came in third. I threw no happy dance. I came in third out of four people. My wife was #1 on both of their scorecards.

I don’t like to cook, I don’t want to cook, and when I’m left on my own, I open a can of tuna, which makes me the favorite cook for my 3 cats and 1 dog. Heck, anything that goes through the can opener is tops with them. Anyway, my feelings weren’t hurt hearing that I’m not good at something I don’t like and don’t care about. And fortunately, I’m not called on to cook very often. Finding out how I ranked diminished my desire just a bit more. 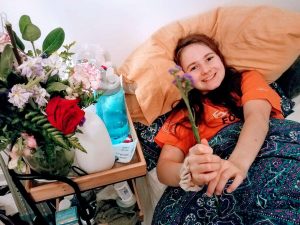 But my 15-year old daughter had hip surgery recently, which turned her into an immobile, articulate, demanding toddler. She couldn’t even get to the bathroom without help. This situation required my wife to serve as an unpaid, live-in, full-time nurse for my daughter.

“I can’t do everything,” she told me after a few days. “Can you be responsible for dinner?”

I said YES before I fully understood that she didn’t just want me to cook for myself but for everybody in the house. It’s not that I’m selfish (debatable), but I have a family with very specific dietary preferences and limitations. I’m a free-range eater. I eat anything within my range. If I can reach it, I eat it. I’m pretty easy that way. But in my house I have vegan, dairy-free, gluten-free, GMO free, organic-only eaters.

I’m a card-carrying carnivore due to religious reasons. I figure if God didn’t want me to eat meat, he wouldn’t have equipped me with incisors and canine teeth. But due to my wife’s request, I tried my hand at making something everyone could eat: a vegan carrot-ginger coconut milk soup.

Moments after serving my immobile daughter her dinner, I heard her yell from the bedroom, “This soup is delicious! Thank you so much for making it. Can I have more?”

Turns out, that was music to my ears.

Two days later, I made a vegan vegetable soup to even greater rave reviews.

Right now, I’m making a yet another vegan dinner.

Manipulation done right isn’t clever nor unscrupulous. But you can readily control or influence a person or situation by just using two powerful words: Thank You.

Thank you says many things in small package:

P.S. The example I used about my family was NOT about manipulation, nor is using Thank You as a way to make others crave your leadership. In fact, the only manipulation (clever, unfair, or unscrupulous) technique used in this entire blog was putting manipulation in the title in hopes it would make you read it. Sorry about that. Won’t happen again!