On May 12, 1907, Anna Jarvis of West Virginia held a memorial service on the second anniversary of her mother’s death. And then Anna set out to make “Mother’s Day” a regular, recognized holiday. She succeeded in making the second Sunday in May a national holiday in 1914 when President Woodrow Wilson signed it into law.

A little known fact is that Anna Jarvis, who lived until 1948, soon came to decry the national holiday she once fought to create. She was disheartened that a day meant to honor mothers soon became commercialized. In her words,

A printed card means nothing except that you are too lazy to write to the woman who has done more for you than anyone in the world. And candy! You take a box to Mother—and then eat most of it yourself. A pretty sentiment. 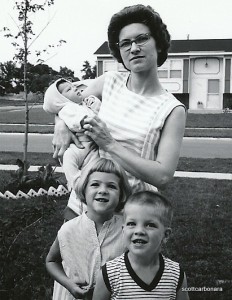 So this year I decided to do something different.

My sister invited my mom to Rockford, IL, for lunch this Mother’s Day. My mom told me that it was too far for her to drive, so while she wanted to go, she was going to pass.

I called her back. I told her I would drive her to Rockford.

For you mom, I will drive the speed limit, I will wear my seat belt, I will use my turn signal. I will remember that when I was little and you were driving me, that you would reach your arm out to keep me in my seat when you applied the brake. And I will do the same for you. I won’t play rock-n-roll music because I know it bothers you. And I will be mindful of all of the sacrifices that you have made for me throughout the years, and I will view this road trip as one small way that I can say Thank You. And I love you.

But just in case, I’m going to have to tranquilize you if you get on my nerves.

Thanks, mom. I love you.

[May 6, 2011 Post Script: No one needed tranquilizers as a result of the drive or the luncheon. Whew!]