So what can you do with a pair of underwear this holiday season? Here are a few things I can think of…

Go for the tax break. Bill Clinton once made headlines when he filed a tax return in which he deducted $2 for each pair of underwear he donated to a clothing bank. His total write-off: $2400! I’m not a math whiz, but doesn’t that equate to nearly 1200 pairs of underwear? I don’t know that I’ve had a need or opportunity to wear 1200 pairs of underwear in all of the years I’ve lived.

Get tangled in your own undies. If you try to do everything yourself and you strive for perfection in all things, don’t be surprised if you find yourself tangled in your own undies. It happens to the best of us. Homer Simpson would say, “Trying is the first step towards failure.” While I don’t know that Homer is accurate, there is some truth in his statement related to what happens when we try to be so perfect that we trip over ourselves. 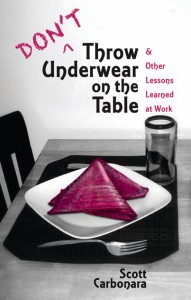 Don’t Throw Underwear on the Table. (SPOILER ALERT! SHAMELESS SELF-PROMOTION AHEAD).  I’ve never considered donating my underwear to charity. Because that’s…what’s the word?…GROSS. But years ago, I had a job where it really did seem like a good idea to THROW UNDERWEAR ON THE TABLE! As a result, I wrote a book that answers the question once and for all about the wisdom of that decision. In the end, I can definitively say that idea was a failure! Hence, the word DON’T got added to the title.

For months I’ve had my panties in a wad trying to get this book on Amazon and on the shopping cart of my website. Apparently, I can either write, or I can become technological. I can’t do both (okay, I lied. I cannot be technological. So that explains why I still don’t have this book available on either place). Instead of staying tangled in my own undies, I’m having some folks figure out how to help me with this.

In the meantime, I’ve decided to offer you the gift of my undies. From now until the end of the year, I’m selling off a limited printing of my book Don’t Throw Underwear on the Table & Other Lessons Learned at Work for $10…and I’ll cover shipping. There are two catches…okay, one catch, and one quirky bonus. You have to email me, and I’ll tell you where to send the check. Since I don’t have it set up through PayPal or other options yet, a check is the only option. I’ll need a mailing address of where you want the book sent. And then POOF! You will have the gift of my undies this holiday season.

Oh, and the quirky bonus? This limited printing has a little spelling error…on the cover! That’s like the Mona Lisa with a mustache: hard to accept, harder still to ignore. Yeah, my panties stayed wadded up for quite a while over that one! But when I’m famous, you will have a very rare copy of my book in your hands. And then you can sell it for $.50 more on eBay once I’m dead.

Peace on Earth! And don’t be caught without the right kind of undies this holiday season. Please feel free to pass this message along to anyone you expect to get their panties in a wad or likely to become tangled over the next couple of weeks!