When I was in school, the word DEBATE preceded the word TEAM. Members of the Debate Team had strong minds that they used to verbally pummel opponents with the weapons of logic and rhetoric. I always imagined that members of the Debate Team were lawyers in training, the types who would go on to defend criminals arrested at the scene of a crime while covered in blood and babbling incoherently, “I didn’t think I could kill him, but I did. It was easier to do than I thought.” Somehow, these Debate Team geniuses would find a loophole to exonerate even the most guilty person.

That’s not the kind of debate I mean. When I refer to winning a debate, I mean winning an argument. And since winning an argument involves being silly enough to engage in one, my proposition is that the only way to win a debate is to redefine WIN to mean LEARN. 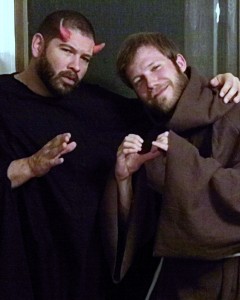 I was at a party the other night. A new friend and I spent several hours discussing the finer points of a particular religious ideology. Let’s just say that we were coming from very different sides of the issue. We talked for hours. We had both attended seminary of sorts. Both held to our beliefs dearly. But there was no debate, no argument.

Here’s why we both WON the “debate”: We sought to understand the point of view of the other. Period. Debate usually conjures up the picture of point-counterpoint and rebuttals. Instead of following that recipe for a huge argument that would leave at least one party feeling attacked or his perspective being ridiculed or dismissed, we tried to fully comprehend the merits of contrary view points. And we found much common ground. No one  used conversation-ending statements like “Well, that’s the way YOU see it. But if you were to study…” or “Your lack of historical knowledge is showing” or “This is the problem with YOU people.”

Want to win a debate? Don’t enter it to score points, launch zingers, or browbeat your “opponent”. Use debate opportunities to fill your knowledge with what the other person knows and holds true. Don’t make it personal. Good people really do disagree at times. Seek to understand more than you seek to be understood. And lighten up. Debate has a way of making people dig even deeper into their belief systems. Once emotions get hot because of cheap shots or conversation-enders, you lose the ability to learn anything new.

Just the same, if you know someone who was a high school or college debater, keep in contact with them. You probably won’t want to invite them to a party, but they might come in handy if you have criminal leanings.