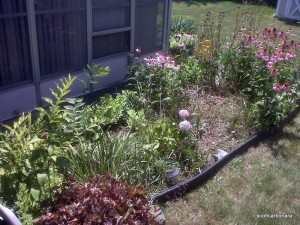 Yesterday, my 13-year old daughter and I drove to my parents’ house to meet with the landscapers who are doing some work in their backyard. My folks need a couple of flower beds taken out along with some small trees in the middle of one of the beds. In the place of the flowers, my mom wants a narrow, raised flower bed made of brick for her own flowers, a paved walkway, and sod to replace the open beds.

The landscaper asked me, “So you’re the one that approved this work, right? Does that mean you’re paying?”

“I sure hope not,” I told him. “I’m just the broker, consultant and translator between my parents and you.”

Driving home, my daughter shared an observation with me.

“Those boys were HOT!” she blurted out. Sadly, she wasn’t commented on their temperatures but rather their looks.

“Okay,” I said. “That’s one perspective. What do you think was grandma’s perception?” I asked.

“Very good,” I praised her. “That’s exactly what grandma was thinking. How about grandpa?”

“Think about it. What did grandpa say?” I prodded.

“He said, ‘Grandma is destroying all of the flowers I’ve spent years growing and enjoying’, or something like that,” she recalled.

“Right. And do you know my perception?” I nudged her. “This is going to be beautiful once it’s all done.”

She agreed, but I couldn’t resist asking her one final question. “So which of the four of us is right?”

“Of course, you are right, dad,” she said quickly, proving that she wants to be well thought of in my will.

“I guess were are,” she said as she thought about it.

“You observed a part of the journey to building a beautiful yard, seeing those young, ‘HOT’ boys. And you enjoyed that part. To you, you chose to see beauty,” I told her.

“They were really cute,” she reconfirmed.

“Great. But now grandma commented on the part of the journey that is important to her: the mess. She saw the journey, but what she chose to focus on is the ugly part of the process. You still with me?”

“Now grandpa, when he looked in the backyard, his focus was on the end result: the loss of two garden plots. We didn’t kill any of his plants. We just moved them to a different, central plot. He can still enjoy them, but what he is feeling is a sense of loss,” I explained.

“Now me, I’m more like grandpa. I focus more on the end result. So I’m not so concerned with the pretty or ugly parts of the journey today; my eyes see the potential of what this yard will become tomorrow. While grandma doesn’t like the mess today and grandpa mourns the loss of his flowers today, both will be thrilled next Spring. Grandma will see no more weeds, just grass that can be kept neat. And grandpa will see his flowers reborn in a new section of the yard,” I assured my daughter.

“Is this like one of those perception exercises where everyone sees something different? But everyone is still right?” she asked.

It wasn’t until later that I amended my statement. While everyone is right in this particular situation, I told her that I thought she was more right than the other three of us.

“Really?” she asked with confusion. “Sooo…you thought those boys were cute, too?” She eyes me with a look that bordered on fear.

“No,” I answered flatly. “But in life, it’s better to focus on the positive as your first response, to see the beauty in other people and in every situation. And then, if you find that your confidence was misplaced, you can adjust your attitude later. It’s a lot healthy to view the world that way instead of seeing only the ugly parts or waiting until everything is complete before feeling a sense of satisfaction.”

All that to say this: Today, I will resist the urge to put on crap-colored glasses when I look around me, and I will enjoy the journey along with the people around me even when I don’t know how it’s all going to end. How about you?