A friend of mine loves dogs. For years, she’s had dogs running around her house. She found them to be great companions and friends. But when her last dog was called to join Jesus, she decided that she couldn’t have dogs again because it was too hard to say goodbye.

Then it dawned on her that a cat would make a great pet. Cats, she reasoned, are just cute, furry dogs who meow instead of bark, aren’t they? And as an added bonus, cats don’t need to be walked during thunderstorms or blizzards since they use a litter box! 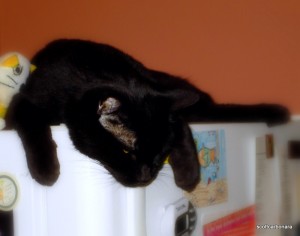 She got a cat. And guess what? A cat is NOT a dog. The cute furriness refused to stay on the cat’s body. Instead, it floated in the air and stuck to everything. More than once, she told me, she’d wake up to have cat hair lining the insides of her nostrils. The cat would sit on her lap at times like a dog, but he usually stayed just long enough to lull her into a false sense of security so he could scratch her brutally before jumping off the side of her face and hiding on top of the refrigerator. True, he didn’t need to go outside to go potty. But that’s only because the cat viewed the inside of her house like a giant toilet.

You might think you can have the best of all worlds, but let’s be honest: you can’t.

Here’s a business example. A neighbor asked me review some resumes with him for a job he’d posted on Monster.com. The job required two diverse skills sets: outstanding sales experience and CEO potential. Not surprisingly, the candidates who had in-depth experience in sales showed little capacity or desire to learn the CEO role; those with great leadership and business experience had no sales experience. When you try to mash together very different skills sets, you end up with someone like the fictitious Michael Scott from The Office…someone demonstrating the Peter Principle in action. Hire a sales person if you need a sales person. Hire a business leader if you need a CEO, but don’t kid yourself into thinking that one person will do both jobs equally well.

This also happens in dating. For example, let’s say that you’re looking for someone with emotional maturity or financial stability. But you refuse to date anyone who is older than twenty-five! Do you see the challenge? You might not be able to have it all…not at the same time. Which do you want more? Don’t kid yourself that you can have both. It’s not impossible, but it is highly improbable.

Know YOURSELF first. Know your PRIORITIES second. Know what you are WILING TO GIVE UP in order to GET WHAT YOU WANT third. Now you’re ready to get yourself a dog or a cat–whichever meets your needs–because now you know why are you making the decision you make.