Last Fall, one of my apple trees looked sick. A neighbor clipped the roots with a backhoe, and blight attacked it with a vengeance. I had to act quickly if I hoped to save the tree so I cut off nearly every limb and branch, soaked it with pesticide, and sealed the bark to prevent a new infestation. In the end, it didn’t look pretty. But I believed it would make a comeback.

Ah, the cleverness of me! While the tree spent the winter doing a great impersonation of a dead mime, it showed signs of life by early Spring. By mid-Summer, the tree looked downright bountiful. It wouldn’t produce apples this year, of course, but it was on the road to recovery. 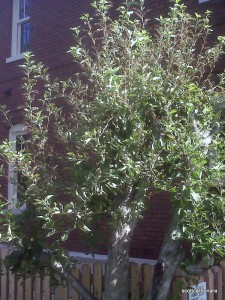 But then the other day when I took a closer look, I noticed a swarm of bugs on the leaves. They weren’t just resting their wings. They were snacking on the leaves to the point where several branches looked like skeletons.

I did some immediate research, meaning I asked my neighbor, Deb.

“What’s the deal? What are those things, and how do I kill them?” I asked. 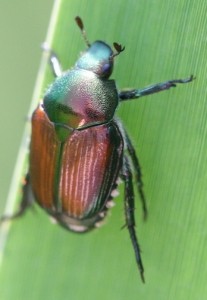 She told me that those were Japanese Beetles, and there were a couple of home remedies I might try to eradicate them. One involved holding a cup of soapy water under the bugs, and flicking them into the water to drown them. That involved touching them, so I ruled out that option immediately . The second suggestion was to create a sugar/water mix in a container, and pop a small opening in the top. The bugs would fall inside, lured by the sweet smell, and eventually drown. I gave it a try.

The next morning, no beetles floated in my mixture. But gathered up next to the container were a couple of lemons. Apparently, the raccoons were giving me recipe suggestions now.

The sugar/water  having failed, I resorted to the internet. One sure-fire cure was called Bag-A-Bug. So I visited my local Bird Bug & Beyond store and bought the trap and the lure. The lure contains a strong sex pheromone that attracts the bugs. Once they go for the lure, they slip down into the bag and can’t get out.

I placed the trap several feet from my tree. I was offering the bugs a choice: you can continue eating my tree, or you can choose to copulate. And something amazing happened. Within minutes, the bugs became less hungry. Or maybe just more amorous. Because a swarm left my tree and hit the bag hard! Amazing. Whodathunk anything good could come out of science and raging hormones!

There are two things these bugs are programmed to do: survive and copulate. In their little buggy ideal world, they’d do both. But even bugs have to make choices and prioritize.

All that to say this: life-balance is overrated. Maybe you can have everything; but not all at once. Trying to balance all of the things you want to accomplish will likely leave you a failure on multiple fronts. Focus, instead, on your priorities, the things most directly linked to your core values and your highest goals. I can’t tell you what those priorities might be for you. But for me, well, I’m going to start making dinner…