You need to learn to pick your battles carefully, both professionally and personally. If every situation you confront in life puts you into battle mode, prepare to be exhausted. Sometimes it’s better to roll with events, to just let things play themselves out. 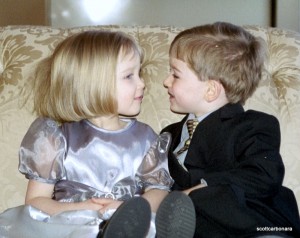 When my son, Jack, approached his fourth birthday, he made an interesting comment about his future plans involving his two-and-a-half year old sister, Alana. “When I grow up, I’m going to marry her.”

Somewhere in the distance, I could hear a banjo playing.

“So,” I answered, “You really love your little sister, don’t you?”

“Uh, huh,” Jack answered with an enthusiastic nod of his head. “And we are going to have a big house and lots of children…”

A second banjo joined the first, almost as if they were… dueling.

Before I could respond, Jack’s mom entered the conversation.

“Jack, no,” she said with a shake of her head. “You can’t marry your sister. Brothers don’t marry sisters,” she explained rationally.

Jack’s eyes got big. “But why? I LOVE HER!” His voice started to get higher.

“Because they don’t,” Jack’s mom explained. “You will always be very close friends, and I hope you live close to each other. But you can’t marry each other and have kids.” On this last point, Jack’s mom was emphatic.

Jack’s eyes gathered large teardrops. His lower lip started to quake. And then he let out a broken-hearted sob.

I held up my hand to Jack’s mom as a way of saying, “Let me handle this.”

I scooped up Jack and held him on my lap. I soothed him in my daddy cradle, and told him to calm down because I had something to say. Once he gained his control, I looked him in the eyes and made him feel much better:

“Jack, if you and Alana still feel this way in 20 years, I guess we can move to Arkansas so you can get married.” (I can joke about Arkansas because my mom’s from there. I get wise-cracking immunity).

Now I have to hope and pray that Jack grows out of it. And given how they fight now that they are teenagers, I think I dodged that bullet.

You have to pick your battles at work, too. Several years back, my boss asked me to consider taking on a new role. While the role he offered me sounded very exciting, I loved my current job. And I loved the team I had developed. So instead of giving a “Yes” or “No” answer, I asked for another option:

“Can I do both? Can I help you in the new position, and keep my other day-to-day responsibilities?” I asked.

He started shaking his head slowly. Then instead of saying “No”, he sat back in his chair.

He didn’t make this an all or nothing proposition. Even though he suspected that I might be a little insane, he let me make the decision. For that, he earned my assurance that one way or the other, I would not fail.

Picking your battles. Knowing when to “ride things out” as opposed to engaging in conflict. Trusting that the people around you will choose to do the right things…even if you have a few doubts. Wouldn’t life be simpler if we all knew when to back away without engaging in needless power struggles?

If you want to dig deeper, to find new ways to stop jumping into battles, check out my friend’s site here: (Marlene Chism). Marlene kindly sent me an advanced copy of her soon-to-be released book appropriately called Stop Workplace Drama. Her book is full of practical tips to putting an end to unwanted drama and conflict.