Early in the spring, I saw a weed in my backyard growing up against the house. I’m not much of a gardener, but I knew that this particular plant didn’t belong in my garden. That entire area of my yard had a thick ring of day lilies. The weed stuck out.

But curiosity got the best of me. I wondered if that weed would produce a flower or pretty bud that would look nice. And, I reasoned, since it grew in a small open path between my lilies and the house, I could easily get back there and yank it out if it became an eyesore. So I let it go and let it grow.

I walked both of my kids out back and pointed to the weed.

“See that?” I gestured toward my experiment. “I’m curious to see how big it’s going to get. Please don’t cut it down, okay?” I asked reasonably.

“But it’s a weed,” Jack responded.

“Both may be true,” I said, holding up my hand. “But I still want to see what it’s going to look like when it gets bigger.” 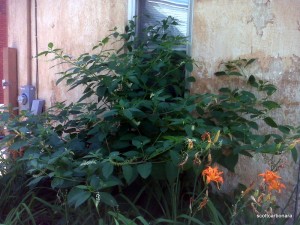 Had I been able to see into the future, I would have let the kids have a go at it with knives, shears, and a pick-ax.

Apparently, my daughter’s comment, “It’s creepy”, made it angry. It grew taller, and it began to spread out. Week after week, I would check on its growth, and I became amazed at how this weed kept increasing in volume.

Finally, I decided to end the test. The weed was choking out my lilies, and its top blocked nearly all of my daughter’s window. The weed needed to go.

As I entered the patch to remove it, I noticed a couple of unusual things. First, while many of the plants, flowers and trees in my yard have been eaten by beetles, the leaves of the weed were pristine. I saw none of the common munch-marks that the surrounding flowers had in their foliage. Weeds seem to have a natural immunity to predators. Once they take root, they plan on staying put. Second, I quickly became aware that a most-loathsome organism was using the weed as a home, a place to nest. Along the base of the plant, I could see spiders the size of birds nesting in webs throughout the branches.

Not only had I allowed a weed to take over my yard, but  it had attracted the one thing of which I find peaceful coexistence impossible. Had a pulled that little bugger out at the roots when I first recognized that it didn’t belong, it would have been over in seconds. Now I needed a hazmat suit, a flame thrower, and some sedatives to deal with the problem…

Do you have a weed in your life that needs to be controlled? A weed might be the one or two things that you flirted or experimented with, assuming the whole time that you could remove it if it didn’t work out.  But instead, it ended up controlling you. Maybe it’s an unhealthy addiction like smoking or eating enough comfort-food to necessitate you owning three wardrobes (Large, Extra Large, and “Oh, dear. What have I done?”). Maybe it’s telling lies or being sarcastic. Maybe it’s slothfulness or laziness.

It’s difficult enough to cultivate healthy, beautiful things in our lives without allowing for the competition of destructive, invasive habits to take over. What weed consumes you and your time? Is it finally time for you to confront them and remove them?