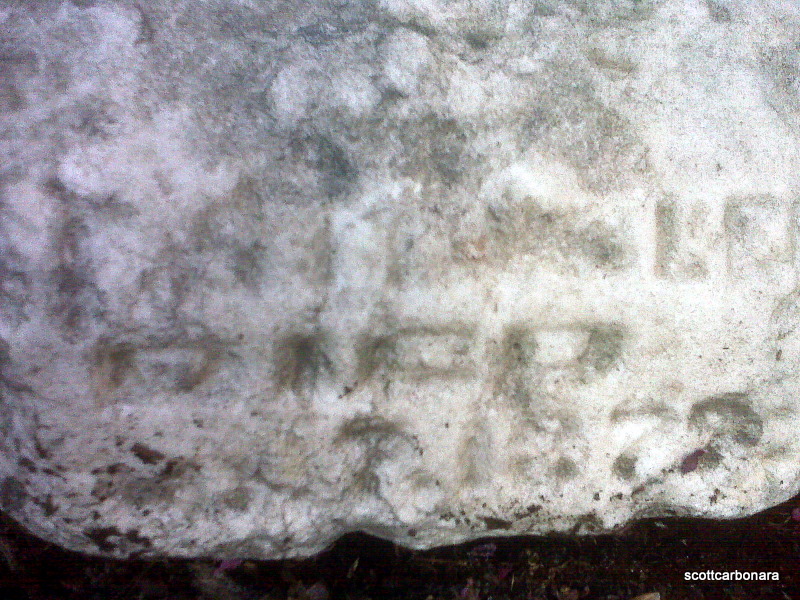 Had some drama on the homestead this week. A neighbor put up a new fence, and he had to cut back several trees and bushes that hovered around the property lines in the backyard. During the clean up, he found a tombstone!

After doing some verbal digging with the neighbors, we learned from a 90 year-old that this was the site of two graves she remembered from her childhood. When she was little, she stumbled across the tombstones, and, after that, none of the children in the neighborhood would walk near this area. It was considered spooked and haunted.

The grave marker is from the 1870s. During that time, it was very common for loved ones to be buried on the homestead instead of at the church graveyard. So this little find has fueled speculation:

The local library and internet shared a wealth of information about the geography of the land at the time, land ownership records, and even some photos. But what’s lacking is a name, an eye-witness, or an actual body.

Some leaders think they resolve problems, when all they are really doing is removing them from sight. They are still there, just beneath the surface. Perhaps they will stay buried for a long time…only to be discovered later by others.

On a long flight, I was talking to an IT consultant. His expertise was in software installation into the existing systems of clients. My organization had just installed some plug-n-play program, but we had terrible problems with its reliability. With any upgrade or change elsewhere in the system, the new product would crash. So I asked him about his product and his experience with things like this. Is that common? How do you ensure system stability if other things change in the environment?

His response: “It’s common. But I don’t ensure anything. My job is to make sure that it’s up and running after the installation. If they have problems with it afterward, they need to have their own IT people figure out how to make system changes without bringing the whole thing down.”

I wasn’t surprised to hear later that his company had been bought out. It seems they had a good product in concept, but their philosophy of customer service and problem ownership led them to bought out by an organization that had its act together.

Let’s say your job is to clean up after horses. Would you expect a bonus for throwing crap from one stall over the wall into the next one? You haven’t removed the crap; you just moved it. And it won’t be long before you see it and smell it again. Or maybe you’re hoping you’ll be gone before it ‘s discovered by someone else.

When you leave your current position, what will others remember about you?

Did you resolve problems? Or did you leave them hidden for someone else to find?