When friends come in from out of town to visit Chicago, they ask me the same questions: what do I need to know, what do I need to experience? It’s like asking me to name my favorite blade of grass on my lawn. It’s not possible. You could live a hundred years in Chicago without experiencing it all.

But here is a skinny version of what you MUST KNOW.

Name. The city takes its name from a wild onion that grew across the area. So what you smell might not be your cab driver.

The nickname “The Windy City” is not a reference to a meteorological phenomenon but rather a character trait of its politicians: they all lie. In fairness, though, this is more a comment about politicians in general than about the city specifically.

Engineering Marvels. The flow of the Chicago River was reversed. Originally the river flowed into Lake Michigan, carrying raw sewage and disease into the largest source of drinking water. A new canal was dug to force the flow of the water to the South and West, away from the lake. This was no small feat. This would be like trying to force water down your drain to flow clockwise if you live in the Northern Hemisphere. (Hint: it goes counter-clockwise).

The Great Chicago Fire of 1871 destroyed 1/3 of the city, a city built largely from timber and brick. Not a city to wallow in self-pity, this event made way for new building materials and techniques, leading to the engineering of the first skyscraper in 1885.

At the 1893 World’s Columbian Exposition, George Ferris launched his 250-foot tall wheel capable of carrying 2,160 people. Today, Navy Pier is home to a “miniature” reproduction of George Ferris’s design. On site is a 150-foot tall Ferris Wheel that provides riders with a panoramic view of the city and Lake Michigan.

A Melting Pot Fact. The ethnicity of the city is broken into rough thirds of Caucasians, African Americans, and Hispanic/Latinos. And Chicago is home to the world’s largest population of Poles outside of Warsaw. 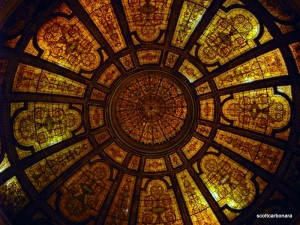 Center of the Arts. Or would that be Centre des beaux arts? The Art Institute of Chicago holds the largest collection of Impressionist paintings outside the Louvre in Paris.

On the corner of Michigan Avenue and Randolph Street sits the Chicago Cultural Center (1897) that originally served as the Chicago Public Library. The building houses the largest Tiffany stained-glass dome inside its Preston Bradley Hall. Oh, and this building was used for the courthouse scenes in the 1987 movie The Untouchables starring Kevin Costner as Eliot Ness.

And, of course, FOOD. Starting at the 1893 World’s Columbian Exposition, some well-known products were introduced to the world:

You can’t visit Chicago without having a true Chicago-style deep dish pizza from Gino’s East, Pizzeria Uno and Due, Giordano’s, or Lou Malnati’s. Residents are required by law to eat a slice of Chicago-style pizza at least once per month (okay, it’s not a real law, but we still do it).

For any other meals you might require, choose an Italian beef sandwich. You can’t do any better than Portillo’s or Al’s Beef. But wear a bib to catch any juice or drool that rolls off your chin.

Population. There are nearly 3 million city residents. Include connecting cities and suburbs, and the number increases to nearly 10 million.

Between domestic visitors, business travelers, and overseas guests, Chicago grows by an additional 46 million tourists each year. So if you encounter someone rude, there’s a good chance he’s from somewhere else. One way to tell is to check for chin juice. Juice residue denotes a novice Italian beef sandwich eater. That rude guy is just visiting.